How do tax brackets work? Do they yield significantly different results than a continuous curve?

In Canada (and many other countries), high-earners pay a greater percentage of their income in taxes than low-earners. Here is our Schedule 1 form:

The marginal utility of money decreases smoothly with increased income: If I earn $91,830, an additional dollar would be slightly less useful to me than the last one. The same is true if I earn $91,831 and earn an extra dollar, but the difference between the two cases is minuscule. 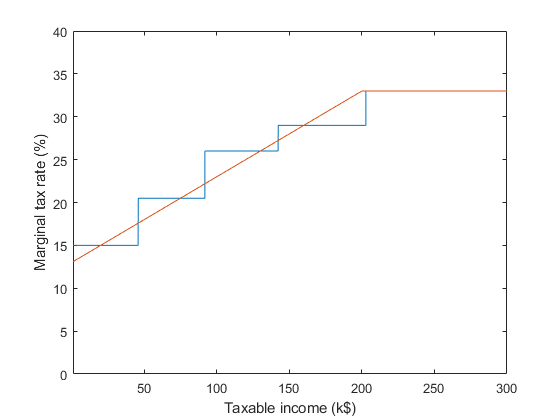 Are brackets are easier to use than a smooth curve? Is it just a "good enough" approximation to make the calculation simpler? The Schedule 1 form would probably look something like this, which is not that bad: you could do this with a 4-function calculator.

The nature of the marginal rate system provides a continuous curve of effective rates across all incomes. The curve begins at 15%, starts to increase once your taxable income crosses the first bracket threshold, and eventually approaches 33% as the taxable income gets very large. 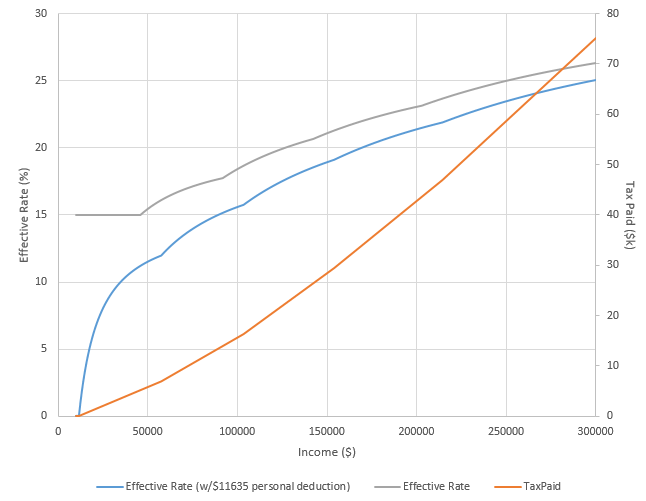 The chart above shows the basic rate calculation (grey) which shows a reasonably smooth effective rate increase above the first bracket. After including the basic personal deduction of (this year) $11,635 which reduces the effective rate to zero below that threshold, we recover the standard curve most people experience (blue).

One of the advantages to the marginal system is that it is easy to figure out how much tax you will save when applying deductions. I’m more familiar with the U.S. deductions, so I’ll use a U.S. example. Let’s say that I’m in the 25% tax bracket. My effective rate is less than 25%, but because of my tax bracket, I know that every $1,000 I contribute to my tax-deductible retirement account will result in $250 off my tax bill.

Lawmakers like to be able to set the marginal tax rates for different income groups independently of each other.

A politician who is negotiating an increase or decrease in taxes wants to be able to communicate very specifically to his electorate about who is hit by, or benefits from, the changes he's voting for.

A single unified curve that defines marginal tax rates for everybody based on just a few parameters would make political fine-tuning impossible. You can't, for example, give low-income groups a tax break without shifting the entire curve a bit, so your tax breaks would have knock-on effects for the the middle class, and thus be more expensive than if you could lower just one of the tax rates.

Having a smooth curve looks appealing from a strictly technocratic point of view, but I can't see any political advantage of it for anyone. Especially when the smoothness comes at a net cost in how much of the citizenry would understand the effect of a quadratic curve intuitively. (Being able to predict your own taxes by following a cookbook recipe is one thing; forming an opinion of the entire tax system and whether you consider it fair requires a deeper understanding).

TL;DR The effective tax rate curve is continuous (no jumps) anyway, so why complicate things?

This marginal tax rate is shown below as the dotted blue curve: 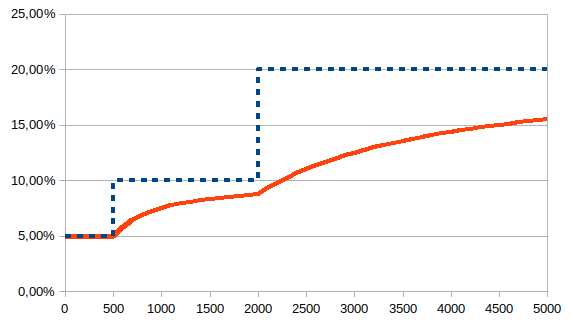 And it yields the red curve as effective tax rate.

Of course, that's only because there was only a tiny fraction of your money that fell in the second bracket. Once you earn more, that proportion is going to increase, bringing the total effective tax rate closer and closer to the tax rate of the second bracket. You can see that in the curve: Between $500 and $2000 the red curve gets closer and closer to the blue one.

That changes again when we have another jump in the marginal tax rate (at $2000). The red curve then tries to get closer to that new tax rate (20%). Once there are no more jumps (because you are in the highest bracket), the curves will get infinitely close.

What's wrong with that? There is nothing to fix here because what matters in the end is the continuity of the curve for the effective tax rate. If the effective tax rate had jumps, that would be a problem because it would mean extremely high marginal rates at those points, leading to situation where earning more money before taxes could mean having less money after taxes. But that's not the case here.

So I don't see what a linear progression of the marginal tax rate achieves. It will only make things much more complicated to calculate: You will have a quadratic function as a result for the total tax owed, which is a result of the integration of your linear function. That's not too nice to calculate for non-mathematicians.

This would be an excellent idea, except people are dumb. Taxpayers have to calculate their taxes themselves, so you have to explain the calculation in a way that a high-school drop-out can figure it out. The manual will say something like

(You could even perform the calculation in two steps, but in my experience, they specify three.)

A dozen lines like that and you have the whole (step-)graduated income tax.

But a smooth graduation? Hard to see how to do that with just a subtraction, a multiplication, and an addition.

And it's not just the filing. The law has to be written and (more or less) understood by lawmakers.

There are a number of points here. First, the obvious conclusion may not be so obvious in economic terms. Modern optimal tax theory, as first developed in the 1970s by Peter Diamond and James Mirrlees, suggests that in the optimal tax rate schedule the marginal rate might peak at some point (it is actually more complicated than this).

More practically, other responders have noted that a smooth marginal tax rate requires more complicated calculations. With electronic filing, or even with a calculator, this need not present a great problem in completing the return, but it does create problems of transparency. First, for the taxpayer. Under the current system, if your taxable income is $100,000, you know that your marginal tax rate is 26%. With a rate structure such as that proposed by the OP, you have to know your exact income to know your exact marginal tax rate. Does this matter? Do taxpayers respond to how they see their after tax income change in fact, or is it important for their behaviour that they actually know what their marginal rate is?

In addition, the proposed structure would make it more difficult for legislators to understand what tax rates they were adopting, and to understand the effects of a proposed rate change. In the OP's proposal there are three parameters: 0.00005%, 13% and 33%. You would need a graph to see easily the effect of changing one of them, and how it worked might not be easy to describe to the non-mathematically minded.

In short, maservant['s suggestion is, at least initially, logical and attractive, but the current system, while arguably crude, has advantages of practicality and transparency. It may not do the right thing, but at least it is reasonably easy to understand what it is doing.

The tax bands mean that your marginal tax jumps up. The marginal tax determines your willingness to do extra work for extra money.

Not the answer you're looking for? Browse other questions tagged income-tax canada or ask your own question.

24
Why is income tax generally not in a continuous “spectrum”?
-8
Avoid taxes after pay rise

2
How do I split my income with my wife?
1
Can my federal adjusted gross income differ by $1 between my federal and state returns?
6
Should I use the tax table or the tax rate schedule for calculating my tax?
2
How to avoid the “60% tax trap”
21
History of marginal-rate taxation in the US